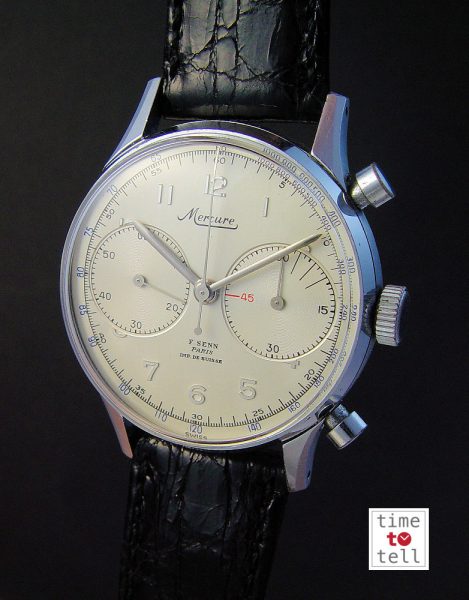 Minerva is recognized by all vintage chronograph collectors for its aesthetic qualities and the superb finishing of its calibers. However, there is one Minerva chronograph that is an exception: the one equipped with the curious caliber 52. It is the only Minerva manufacture caliber that we do not want to show too much!

For the amateurs of old chronographs, the Minerva caliber 13/20 is a must. Moreover, this caliber is always mounted in beautiful watches with beautiful cases and dials. 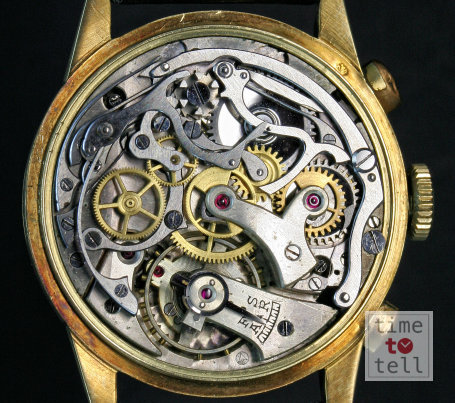 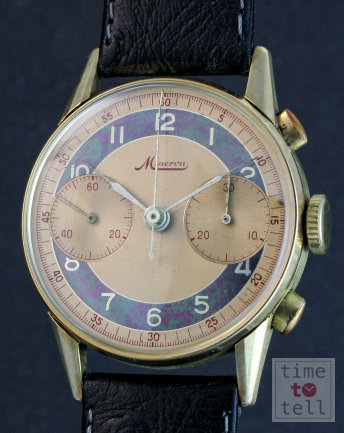 Externally this Mercury chronograph is also superb: beautiful case, oversized counters and beautiful hands. However, when we discover the movement, we remain perplexed: no column wheel, no polished and beveled parts, wire springs and even a coil spring that we usually find in cheap sport counters! How can such a movement be found in a Minerva chronograph? 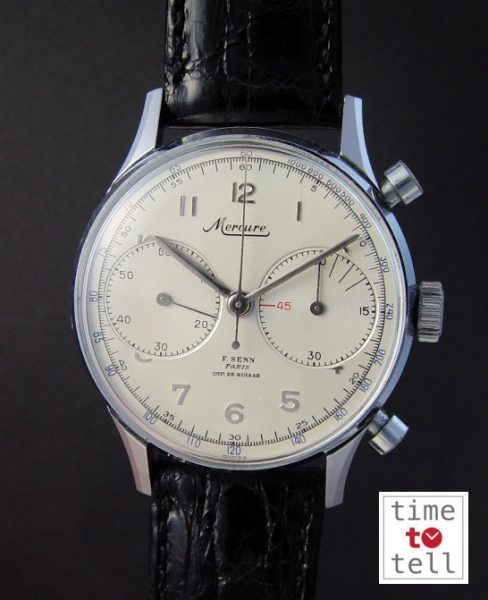 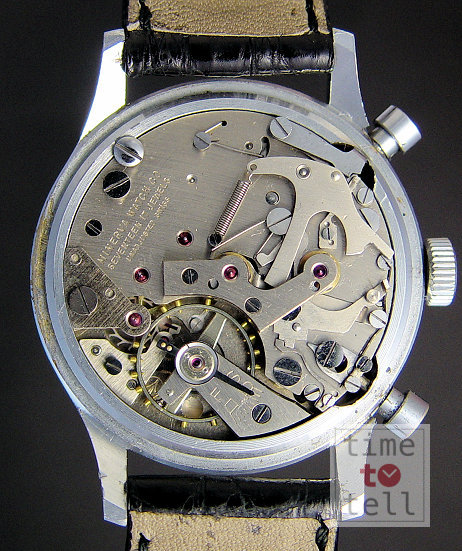 It is necessary to put this watch in its context. At the end of World War II, the demand for Swiss watches exploded, but it was mainly for economical watches. Chronograph manufacturers understood this and adapted: if the Chronodato from Angelus or the Tricompax from Universal were successful, it was because they were also affordable.

In addition, the largest supplier of calibers, Ebauches SA, initiated the development and production of economic chronograph calibers at the end of the 1930s, in particular with the development of the calibers without column wheel Landeron 47 and 481 (1939-1940), and the economic caliber Valjoux 77 ECO (1946).

Minerva (in fact Minerva Sport) being a Manufacture did not have access to the calibers of Ebauches SA2. André Frey and Maurice Favre, who directed the company at that time, thus took the decision to design their own economic caliber.

The patent3 was filed in October 1944 but not published until January 1948. It concerns a chronograph with a simplified mechanism, without a column wheel, with a vertical clutch that saves wheels, more economical wire springs, and even a coil spring for the hammer return, typical of sports counters. This is a far cry from the beautiful polished and beveled parts of the beautiful Minerva 13-20! The coil spring was well known at Minerva: its application in sport counters had been patented as early as 1930. 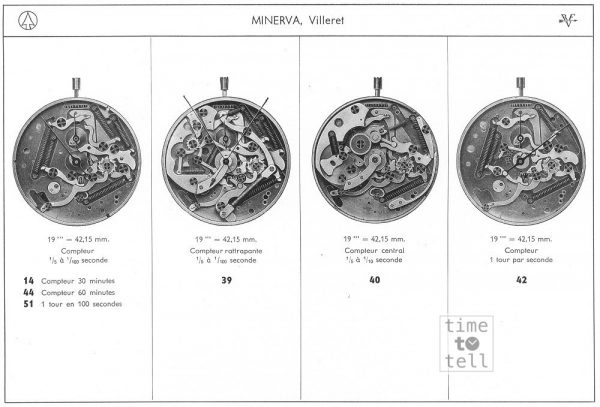 Chronology of the different Minerva companies4:

– c. 1911: the Minerva brand is reserved for chronographs and sport counters

– 1935: The company in liquidation is taken over by Charles Haussener and Jacques Pelot under the name Fabrique d’Horlogerie Minerva Sport SA.

– 1989: André and Jean-Jacques Frey as directors

– 2000: the company is taken over by the Italian financial company Hopa spa

– 2006: the company is taken over by the Richemont group and integrated into the Montblanc company 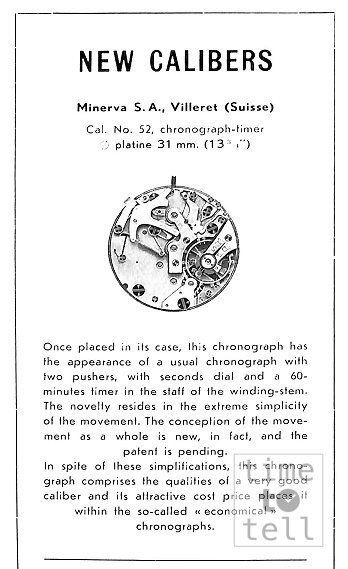 From the Journal Suisse d’Horlogerie – 1949

The caliber 52 was introduced in 19495. It is a caliber of 13 ¾ lines (31.00 mm). It was used under the name Mercure and not Minerva. Mercure is an older brand name of the company, used for more economical watches. Originally spelled “Merkur”, it became “Mercure” at the turn of the 20th century and referred to “extra cheap” anchor watches, while Minerva was reserved for watches with cylinder escapements. It was not until 1911 that the Minerva brand was reserved for chronographs and counters. 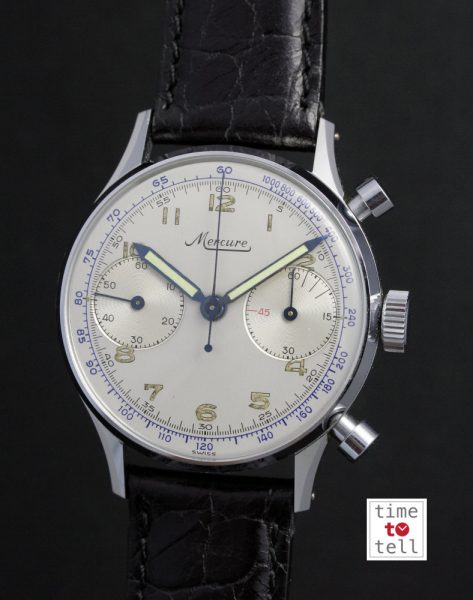 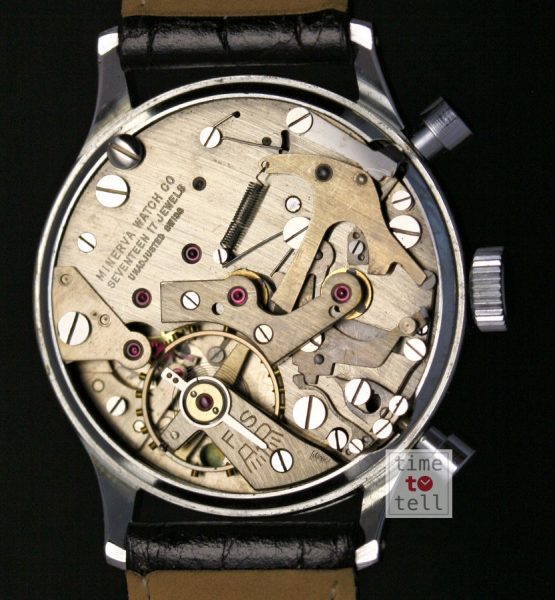 The Mercure chronographs equipped with the caliber 52 all have a rather similar design: diameter of about 37.00 mm, dial with large oversized counters, simple or radium hands and indexes. In most cases the cases are chrome or gold plated. Only the back is always made of steel. Two details make it possible to recognize a caliber 52: the counter is of 60 minutes, which is very rare at this time except for Movado, and the pushers are very far from the crown, which is the case also of the caliber 13/20. The minute counter has the classic 3 min index for telephone conversations, but also an index at 45 min. 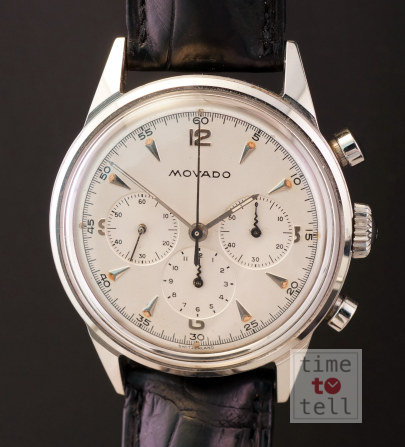 The caliber 52 was probably not manufactured for a long time. The fashion for chronographs with calendar functions forced Minerva to use Valjoux calibers, and the decline of the chronograph in the 1950s led to a strengthening of the range of automatic watches and counters. 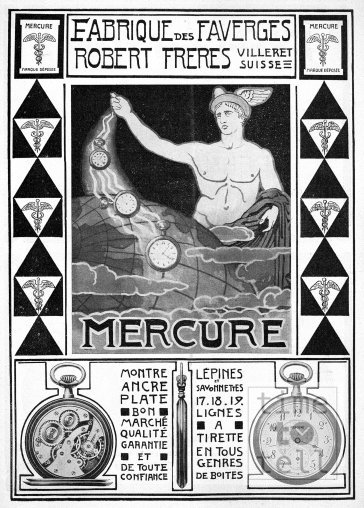 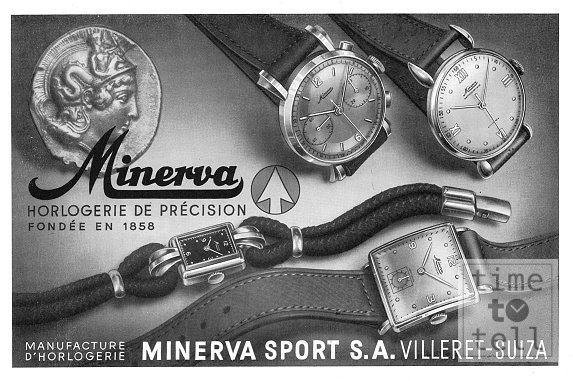 2 There is however a particular case with the Valjoux calibers which joined the Ebauches SA trust only in 1944. The Manufactures which used in part Valjoux calibers before 1944 (it is the case of Minerva but also of Rolex or Patek Philippe) could continue to use them after 1944.