Who still has the 1970s chronographs from Hamilton in mind? Set apart in the shadows by Breitling and Heuer watches, however Hamilton played a crucial role in the launch of the famous Chronomatic calibre. The brand's flagship model at that time was the Fontainebleau – named after a famous French castle. A nice chateau that deserves to be re-visited today.

Collectable Hamilton chronographs today suffer from a communication, at the time of their launch, less striking than the others. On one hand you had Jack Heuer successfully associating his brand and his watches to the world of racing cars and Willy Breitling to the world of aviation. Hamilton however never associated its chronographs to any universe. Hamilton chronographs and in particular the Fontainebleau, today only have their design and technical quality to rely on. And those from the Fontainebleau should be considered.

First of all, there's the movement. Equipped at its launch with the Chronomatic calibre 11, the Hamilton Fontainebleau was amongst the first models introduced with this automatic chronograph, in March 1969.

Patent for the case of the Fontainebleau from March 9th, 1966

Then, there's the “squared-cambered” case, waterproof, which links it to the Heuer Monaco, a mythical watch with a squared-shape case, coming from Piquerez S.A in Bassecourt, and being the second waterproof chronograph with this shape of case. The particular case of the Fontainebleau was an original creation of Hamilton, patented in 1968 by Ulrich Nydegger. 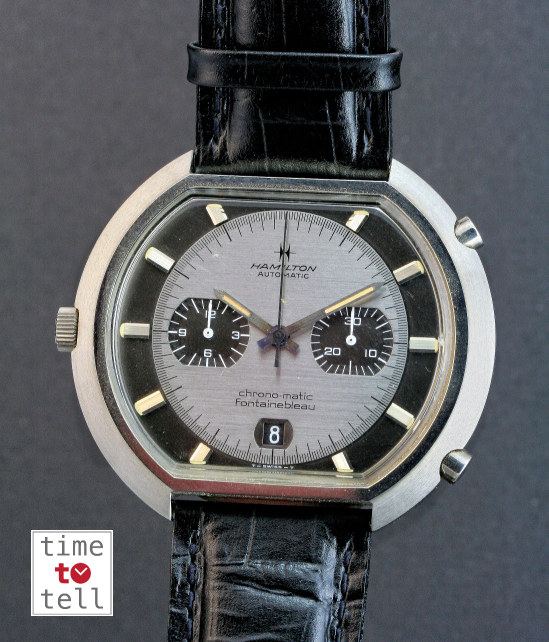 The dial also has strong arguments. It shows a “panda” style (a white or silver background with black sub-counters) and it has the advantage to keep the sobriety of 1960s chronographs' dials. On the contrary of many chronographs equipped with the Chronomatic, prefiguring the design of the 1970s, the dial of the Fontainebleau has nothing showy or exuberant. 3 colours only for the dial and the hands were used: black (in reality a very deep blue for the hands), grey and white. This sobriety highly contrasts with the avant-garde shape of the case, leaving the show on this part only. A shape that actually allows the watch to have, in addition to a usual round dial, a very appealing asymmetrical flange with applied indexes. 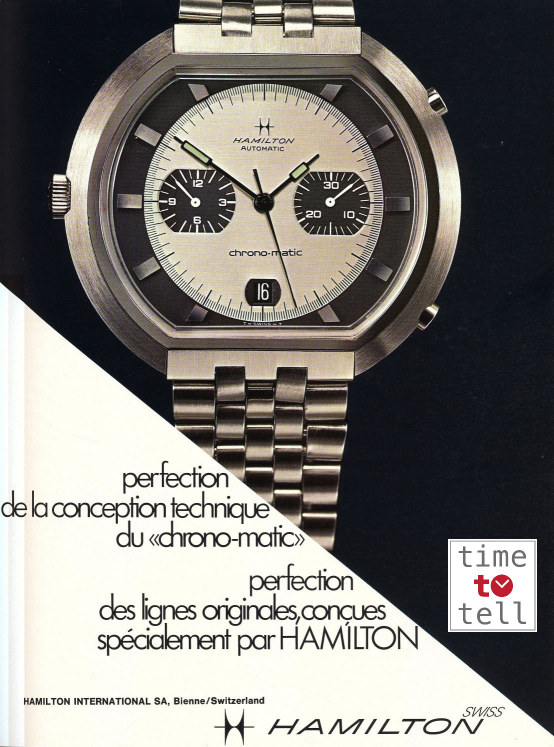 1969 advertisement for the Hamilton Fontainebleau chronograph. The hands on this model are not the final ones.

There is still a mystery running around the hands of the Hamilton Fontainebleau chronograph. When introduced to the press in March 1969, the prototype had thin hands adorned with a luminous rectangle (named “paddle hands”). However, all the models that can be found nowadays features rather long hands, slightly striated and in an appealing deep blue. Did some models with thin paddle hands exist? Or was it only prototype hands, which were finally never selected, like with the early El Primero presented in January 1969? 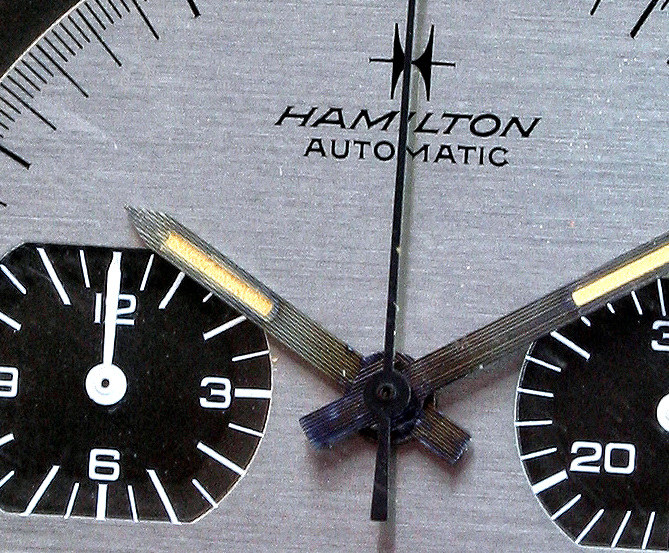 The final execution of the Hamilton Fontainebleau hands have a typical striated aspect.

The generous dimensions and the quality of execution of the Hamilton Fontainebleau chronograph allow a daily wearability. Examples in fine or mint conditions are not rare and prices remain reasonable. Service is rather stress-free and parts for the Chronomatic Calibre can easily be found. The only weak point is the hesalite glass, as its unique shape only allows an exchange with original parts. A quick search on eBay however shows that several Fontainebleau cases are listed. This will be helpful for the collector in a need for spare parts. However, it does demonstrate that the Fontainebleau is usually “dismantled”, because of its Chronomatic movement (used for parts). Indeed, the Hamilton Fontainebleau chronograph has become, year after year, a generous “movement donor” – rather sought after because of its attractive price. This nice collectible watch does deserves better treatment than being dismantled by counterfeiters in a need for parts and easy-money. 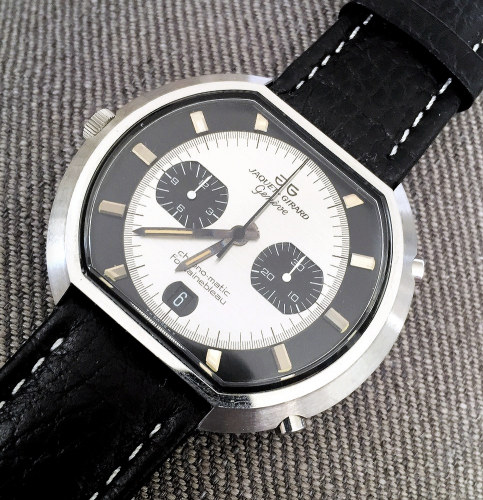 It must be noted that the Hamilton Fontainebleau chronograph was also retailed by other brands, such as Jaquet-Girard and Lanco. It isn't clear why other brands were able to sell this model under their names. Possibly, Hamilton's failure and the very short commercialisation period of this model created a huge unsold component stock, which needed to get rid of. This could also explain why so many new-old-stock Hamilton Fontainebleau are still available on the market nowadays. They were most likely assembled and sold far after the end of the official commercialization of the model.

Finally, for those who find the design of the Hamilton Fontainebleau attractive but who don't want to wear such a large chronograph, you need to know that, on the contrary to the Heuer Monaco, the Fontainebleau was also produced in several 3-hand editions, both for men and women.

Hamilton and the Europe: the death of an American Giant

Created in 1892 in Lancaster, in full glory of the railroad watches, and owner of Illinois Watch Co. since 1927, the Hamilton Watch Co. was one of the flagships of the American Watchmaking industry. The quality and the precision of Hamilton watches was highly agreed through US, including (and mostly) by the US Army, which ordered considerable amounts of watches for WWII. At that time, Hamilton could produce up to 500 marine chronometers a day.

After 10 years of research, Hamilton launched in 1957 the first electric wristwatch. Introduced as the watch of the future, this new watch coincided with an expansion program for Hamilton, decided to cross the US borders. First objective: Europe, by installing a subsidiary in Switzerland, of course. This will be done in 1959 by taking over the A. Huguenin Fils SA manufacture, in Biel. This Maison, which celebrated its 100th anniversary in 1957, appeared as an excellent industrial tool and already had a selling network in Europe, in US and in South America. In 1962 Hamilton opened subsidiaries in UK, in Belgium and in Japan, and at the same time launched models combining Swiss technology and American design: Elipsa in 1962, Pan-Europe and Estoril in 1963 (two names showing the European wishes of the brand). Finally, in 1966, Hamilton took over Büren Watch Co. in Biel.

On the contrary of Huguenin, Büren is a proper manufacture, creating its own movements – and it's a specialist of automatic watches. For instance, Hans Kocher from Büren invented the automatic watch with micro-rotor in 1957, allowing for the first ultra-thin automatic watches. Some patent licenses were even accorded to prestigious brand like Universal and Piaget. At the moment of the take-over, Büren was working with Dubois Depraz on a special and secret project: the automatic chronograph Chronomatic. 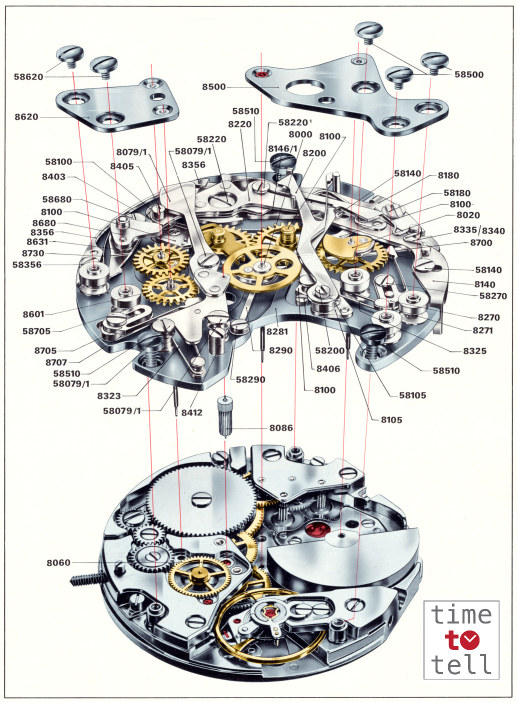 That's how Hamilton came to participate in the launch of the first automatic chronograph with micro-rotor. It tends to be forgotten but in March 1969, next to Willy Breitling and Jack Heuer, was Robert Kocher, vice-president of Hamilton International. 3 Chronomatic watches were proposed by Hamilton at the time of this launch: two with a classical round case (one with blue dial, one with panda dial) and one chronograph with a distinctive case: the Fontainebleau, named after a collection of automatic watches started by Hamilton in 1968.

Hamilton's creativity hugely increased which almost come to a frenzy: a new avant-garde line in 1970 – the Odyssée 2001 – some quartz watches with digital display in 1970 too – the Pulsar, in collaboration with Electro-Data Co. in Dallas, sold for an insane price of 1,500 USD – and a superb GMT edition of the Chronomatic in 1971, the famous Count-Down.

However, the financial situation becomes brutally disastrous. From 42.5M$ in 1969, the turnover dropped down to 26.7M$ the following year. The US Army decreases its orders, the economic recession didn't help and the investments done appear to be too high for Hamilton. Finding funds becomes necessary.

The Société Suisse pour l'Industrie Horlogère (the SSIH, also owner of Omega, Tissot and Lemania, and future Swatch Group) will bring them, by taking over Hamilton, via its subsidiary Aetos in the US, in 1971.This marks the end of the Chronomatic, which components ceases to be produced. It also marks the start of the Swiss era of Hamilton. 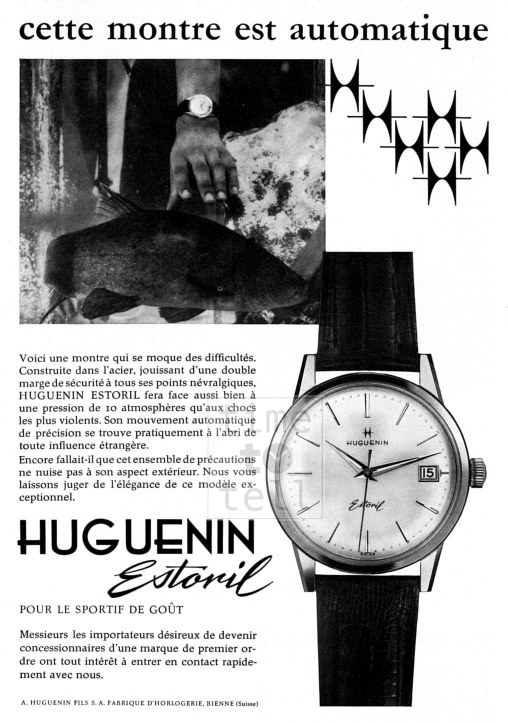 This article is from Sébastien Chaulmontet and Joël Pynson, authors of the book Chronographs for Collectors.

Spécial thanks to Monochrome Watches for the english version of the article, aslo available here