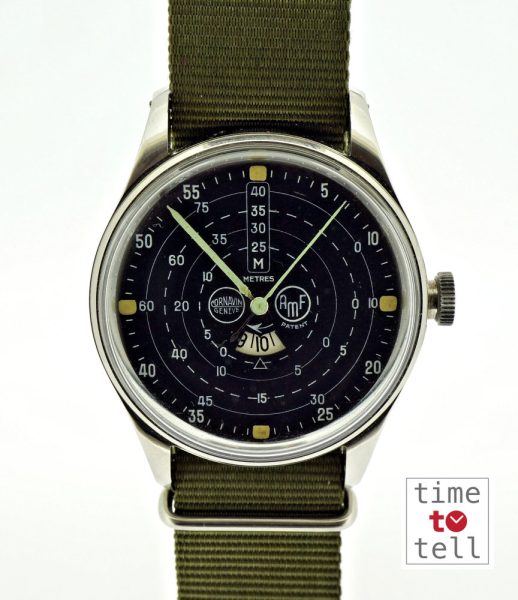 The standard of the diving wristwatch was defined in the early 1950s: a waterproof steel case, a black dial with luminescent numerals and indexes, and a rotating bezel to indicate the dive time and respect the decompression stops.

There were of course many waterproof watches before this date, such as the Depollier of 1919, the Rolex Oyster of 1926, the Omega Marine of 1932, or the Panerai watches of the Second World War. But none of them had the famous standard that is still the rule today.

The first two Swiss diving watches were designed around 1953 with the help of French divers: the Rolex Submariner, tested at the Institute of Underwater Research in Cannes[1], and the Rayville-Blancpain Fifty Fathoms designed with the help of the Combat Swimmers Unit and its truculent captain Robert Maloubier[2].

A third diving watch, which is extremely rare and of which there is virtually no trace today, was patented in Switzerland in 1953. It was marketed by a small watch factory in Geneva, Cornavin Watch. It bore the initials AMF and P.810 on the back, was unlike any other, and was the first watch to display decompression times, based on depth and dive time.

In 1949, Walter Gygax launched the Cornavin Watch in Geneva. The watches were very conventional, calendar watches, automatic watches, ladies’ watches, and the calibers came from the Ebauches SA trust.

How Cornavin came to develop a watch as complex and technical as a diving watch remains an enigma. Perhaps there was a link with AMF, also based in Geneva, or with David Jayet, the inventor?

In any case, the P.810 did not bring luck to the Cornavin Watch, which went bankrupt in 1959 and then changed owners several times. The name Cornavin will even be used later for Soviet-made watches.

American Machine & Foundry Co. was founded in New Jersey in 1900. It was an extremely diversified company, producing everything from cigarette-making machines to industrial bakery machines to bowling equipment[3]. Its leisure products division was highly developed: pleasure boats, skis, tennis rackets, golf clubs, etc. AMF was also involved in underwater recreation, and even owned for a time Mares, a famous Italian diving equipment company[4].

In 1952 AMF opened offices in Switzerland, in Geneva, with the creation of several companies including Ammafoco, which became AMF Overseas Corp. in 1958. This company had among its objectives the acquisition of patents. And in the field of diving equipment, it found its man: the French diver David Jayet.

The Mediterranean was definitely the research laboratory of the pioneers of the diving watch. According to his first patents, David Jayet lived in Le Trayas, between Cannes and Fréjus. He must have been an excellent diver, but above all he was a prolific inventor: between 1953 and 1955 he filed 6 patents in Switzerland on diving equipment, and on very diverse subjects: watch, dagger, pressure gauge, breathing apparatus, waterproof box for camera and fins! 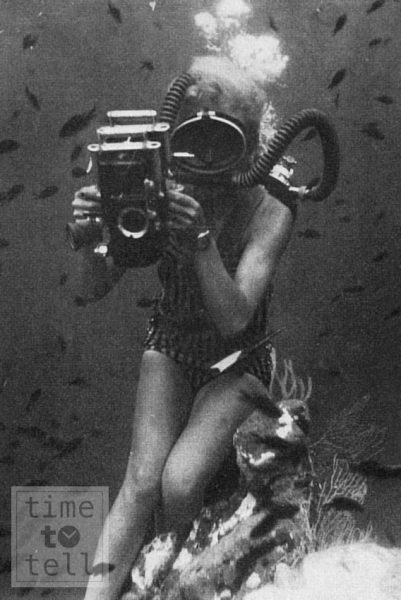 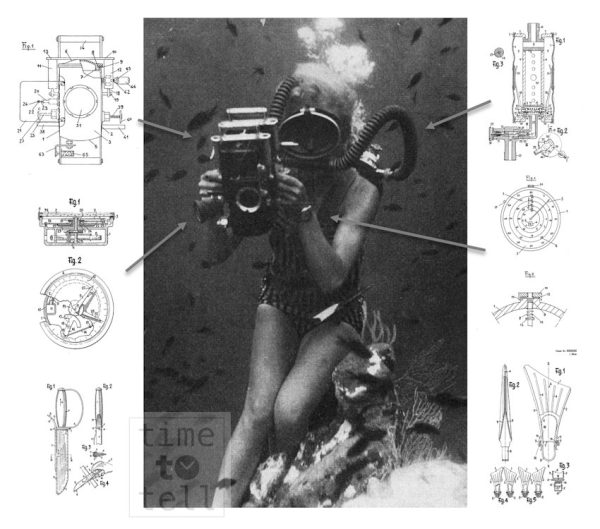 On this rare document, published in 1955, we can see Mrs. Jayet diving with at least three of her husband’s inventions: camera, watch and pressure gauge. It is not impossible that the dagger, fins and breathing apparatus were also part of his equipment.

David Jayet also lived in Switzerland. According to some patents, he lived in Geix, near Yverdon-les-Bains: normal for a diver to live near a large Swiss lake!

At least 4 of David Jayet’s 6 patents have been taken over and exploited by Ammafoco, and among them is the Cornavin watch. 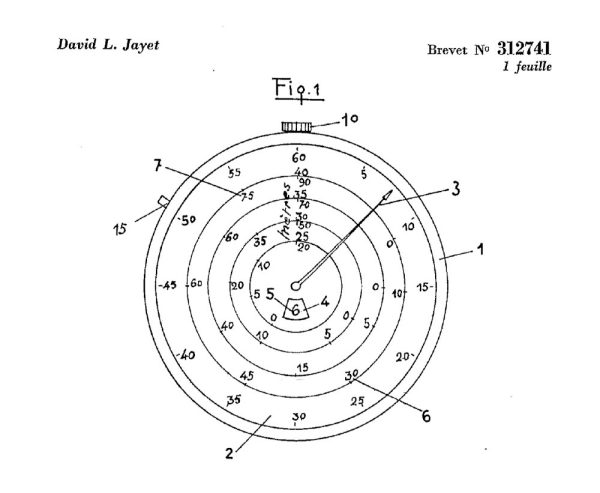 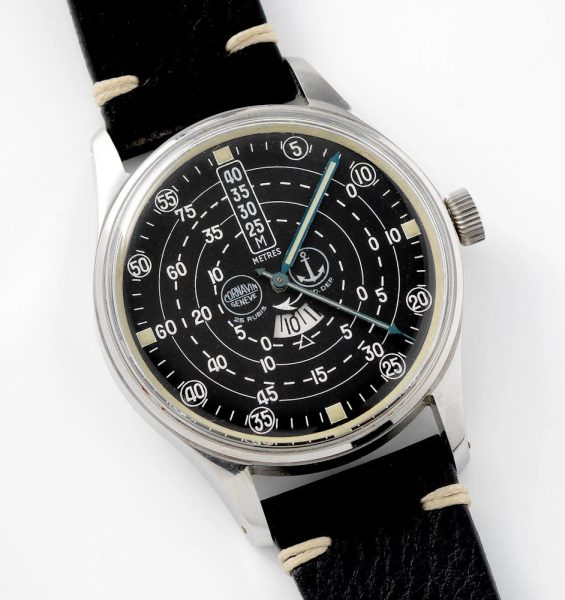 Jayet has designed its watch as a safety tool for the diver. It therefore includes the decompression times that must be respected during deep dives. The dial is organized as follows: at the top, below 12 o’clock, there is a cartouche with 4 digits, from top to bottom 40, 35, 30 and 25, indicating the diving depth, indicated in meters, which is recalled by the letter M and the word METERS. Each of these depth indications is associated with a concentric circle that is used in conjunction with the large central minute hand, which must be set to zero at the start of the dive. Thus, for a dive to a depth of 35 meters that lasted 50 minutes, the decompression time shown on the 35 meter circle is 60 minutes. For a dive to 25 meters that also lasted 50 minutes, the decompression time is only 10 minutes. 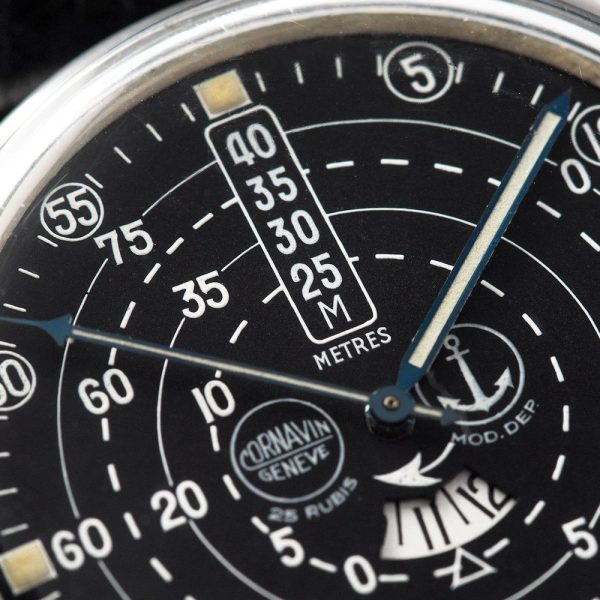 Note that there are rare versions of the P.810 with a scale in feet instead of meters. In this case the M is replaced by F and METER by FEET. 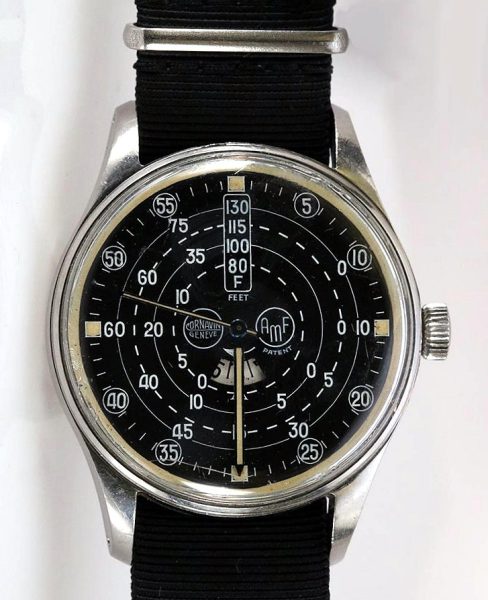 Because of the importance of the hand and the minute scale, Jayet has removed the hour hand and the hour circle, replaced by a simple window with a rotating disc. This is not a jumping hour, as on some watches of the 1930s, but it had the advantage of avoiding confusion with another hand when diving. The central seconds hand ensured that the watch was working properly.

Jayet’s patent describes an additional pusher for setting the minute hand to zero. This solution, which would certainly have required a costly development, was not retained by Cornavin, and the reset was thus done after having unscrewed the crown. 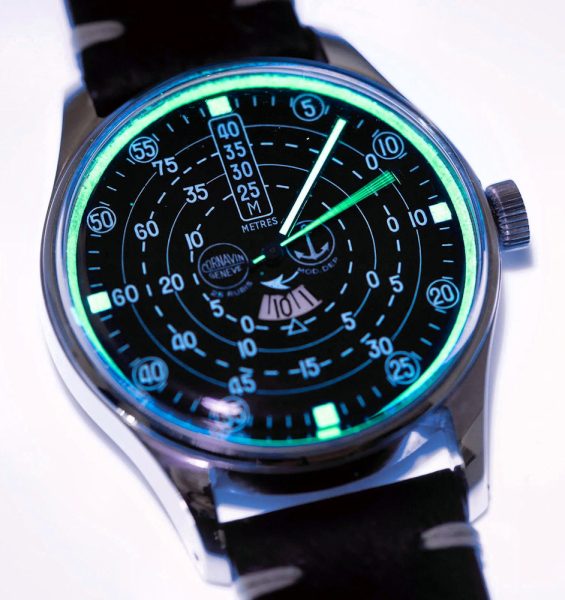 There are 4 square luminous indexes, with radium, at noon, 3, 6 and 9 o’clock. These luminous dots are rather small but there is also a remarkable luminous circle all around the dial so that in the dark the position of the luminous hand between the indexes is perfectly visible.

There is no indication of the radioactive material used: this will be made mandatory in Switzerland only with the federal ordinance of May 1st 1963.

Finally, there are two small circles on the dial on either side of the center, one for the Cornavin mark, the other for the AMF mark with the word PATENT underneath. In place of the AMF mark, one finds on certain models the drawing of an anchor and below MOD. DEP (registered design). There was thus a double intellectual protection, by patent and by model.

The watch was to be used in combination with a depth gauge: no problem, the Jayet one was also marketed by AMF[5]. 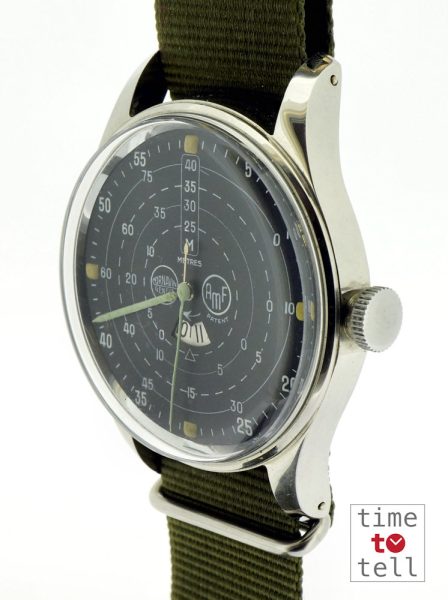 The case has very unusual dimensions for the time: nearly 42 mm in diameter, excluding the crown. It is made of stainless steel with a screwed case back, and when you open the case you see an imposing ring surrounding the movement, which is of the usual size: 10.5 lines, or 26 mm.

The crown is also screwed, sometimes on a tube protruding several mm from the case. 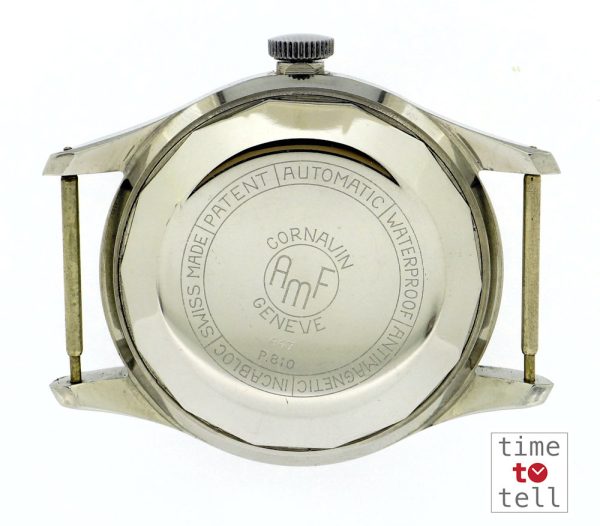 The back inside unfortunately does not show any mark that could have identified the manufacturer. On the outside we find the AMF logo in the center, surrounded by the words CORNAVIN GENEVA. On the periphery, the classic mentions of any good Swiss watch: Waterproof, Antimagnetic, Incabloc, Swiss made, Patent, and Automatic.

Finally, the initials P.810 are also engraved, accompanied by a number that could be the serial number. On the rare examples of this watch still existing, this number is less than 500.

The Cornavin P.810 is equipped with a Felsa caliber, manufacturer integrated in Ebauches SA. Cornavin not being a Manufacture had to be supplied by Ebauches SA because of the watchmaking status which governed the Swiss watchmaking since the 1930s. 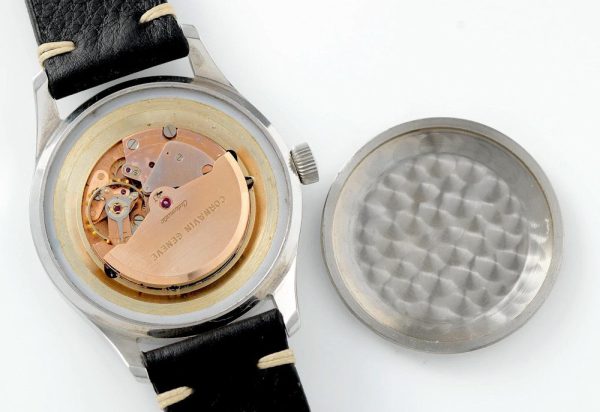 The Felsa 810 caliber derives from the famous Felsa Bydinator, the first automatic caliber with a rotor arming in both directions of rotation, created in 1942. This caliber, of 11.5 lines (26 mm), existed in many versions: small seconds, large seconds, calendar, power reserve, etc.

In the early 1950s the Felsa Bidynator was modified, in particular by the option of a power reserve by window and not by hand, and renamed Permutator. The two main versions of these calibers bore the references 699 and 760[6]. The caliber 810 is therefore probably a modification of the Permutator, hence the acronym P.810. At the time of the presentation of the watch, in 1955, the watch bore the reference Cornavin F.P.810, which would be in favor of Felsa Permutator 810.

The Felsa family of automatic calibers was known for their strength and reliability, so it was a wise choice for a watch that would not fail.

If it is so difficult to find information today on this watch, it is because its presentation to the professional press in 1955 was only relayed by two specialized magazines: the Revue Internationale d’Horlogerie in 1955, and The Swiss Watch in early 1956. The most widely read magazine at the time, the Journal Suisse d’Horlogerie, did not mention it.

The picture of the watch given to the press in 1955 is perfectly consistent with the watches produced: this means that it was probably not a prototype but a watch in production.

However, it is doubtful that this watch was very successful. It has a major flaw: the minute hand has to be set to zero before the dive, which means that it no longer gives the exact time, and that it has to be reset after the dive.

The ideal solution would have been to use a chronograph with a center minute counter, such as the Mido Multicenterchrono that had been around since 1941. But in 1953 there was still no automatic chronograph, more secure, and the waterproofness of the pushers of the chronographs in diving was not guaranteed. 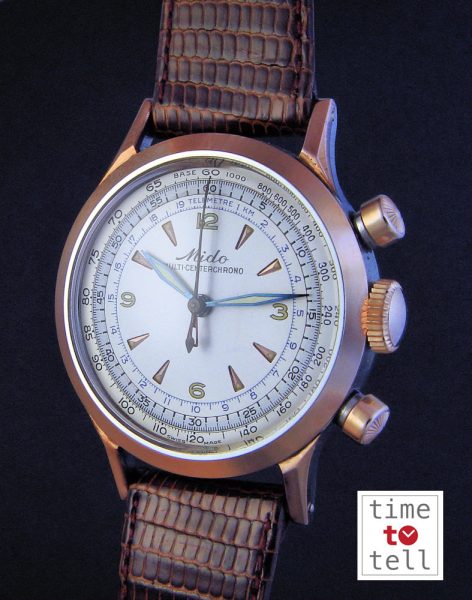 After the first 3 diving watches, it took a few years before new companies were interested in this type of watch in Switzerland. It was not until 1957 that Omega launched its Seamaster 300, still a manually wound version, and then several automatic models were released in 1958: the Enicar Sherpa Dive, the Zodiac Sea Wolf with white dial[7], the ARSA Hydrabloc and some versions of the Zenith S.58. Before 1960 there will still be diving watches from Longines, Ardath (Denis Diver) and Precimax/Exactus (Aquamax). From 1960 onwards, the diver’s watch became an obligatory model for practically all Swiss manufacturers, with the exception of the Geneva luxury watch industry.

Jayet’s contribution to Swiss watchmaking continued for many years: the decompression time scale he had proposed in 1953 was used by several manufacturers for their diving watches, in particular Vulcain, Mido and Fortis. 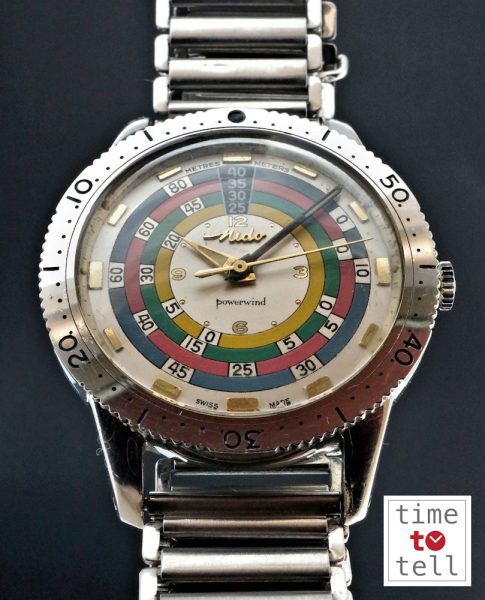 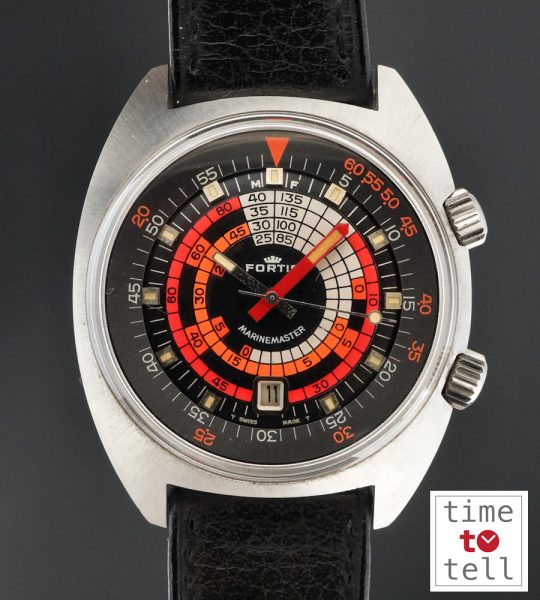 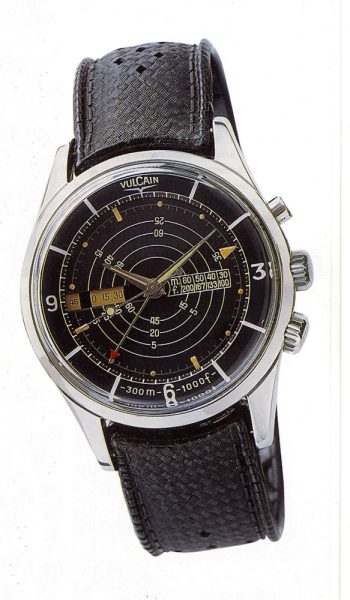 Most of the watch archives were consulted at the Musée International d’Horlogerie in La Chaux-de-Fonds and I warmly thank the Museum’s curator, Mr. Régis Huguenin and his team, for their welcome.

Thanks to Alex Klezok at  Uhrwald, to Guy Sense at Bulang and Sons for the superb images, and to  Matthew Baine for the rare version with the feet scale.

[1] Report on the tests of the Rolex Submariner, letter of October 26, 1953, published by Rolex Magazine

[7] The year 1953 is sometimes given for the launch of this watch, which is not attested by any credible document. The first presentation of this watch at the Basel Fair was in 1958.